By Chris Gilligan on August 26, 2011 in Web Server Performance Tuning

SoccerNews.com is a high traffic WordPress site with over 600,000 unique visitors and over 2,000,000 page impressions per month. It is a content republisher and aggregator, presenting custom XML feeds for (what else?) soccer news from all over the world. The site has a very active user base, providing content in the forms of editorials and comments on news items. Advertising and sponsored referrals provide the revenue stream. 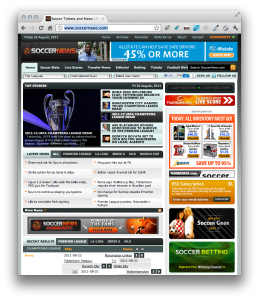 I was contacted by the publisher after responding to a plea for assistance in a WordPress.org support forum. Though the site was running on a dedicated server with 8GB RAM, it was crashing frequently under load. The developer tried implementing APC Alternative PHP Cache and W3 Total Cache, but these measures turned out to be incompatible with some of the custom PHP code and the software architecture of the Cpanel server. Haphazardly implementing randomly suggested “solutions” had actually made the problems worse, resulting in an “own goal” that brought down the server.

I did an assessment of the software, hardware and traffic load and found that there were many improvements to be made. Among the changes:

Now the site is stable and fast, and is ready for very high traffic. With World Cup Brazil coming up in 2014, the site will definitely see a huge amount of users. Future plans include changing the architecture of the server to simplify the background processes and implement APC Alternative PHP Cache, or a caching web server front end.

Results? I’ll let the publisher speak to that!

The site has been as good as “flawless” since, with no downtime, and we couldn’t be happier. Everything is running smoothly and it’s a great relief knowing that we made the site faster, safer and more reliable. The site feels a lot more stable and faster. So you’ve done a great job.